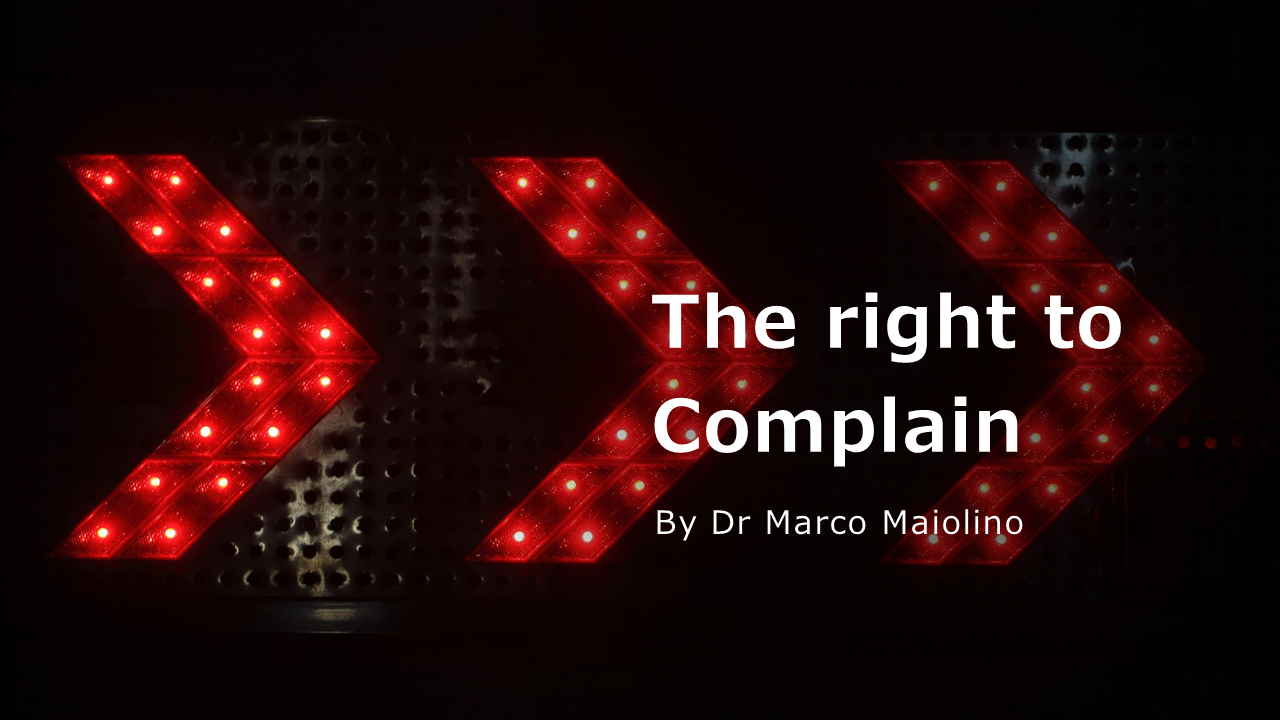 16 Feb The Right to Complain

Posted at 09:24h in Editorials by Tomorrow Tooth

Some thoughts about …have we the right to complain?!?

When I started working the environment was less than ideal.

My father, a dentist, was very firm in his belief.

The dental dam was something seen only in books and congresses; also those showing their use were people doing just some cases for “circus “ and not a real routine.

There was a huge gap between the daily reality where I was working and the gold idea I had of the work.

Bu the gap was so wide and the number of things against so large that  I clearly remember that, after work, I indulged at complaining.

I’ve never been that kind of person that easily complains ….I’ve never liked people complaining about everything. I found them very boring but, in my mind, there was a great difference between me and them.

The first point, before starting to work as a dentist, I almost never complained.

In sport, for example, I ‘ve always been much focused, I’ve never complained about fatigue, nor had fear of spending hours doing something.

But in that case, the “battle” was only between me and the sport. It was a fair game.

Complaining about poor results in these situations was something only typical of weak people.

Also studying for exams was usually fair game. The good knowledge of the book was rewarded with a positive mark.

I’ve always hated useless complaining and crying…especially where the rules of the game were clear. In my mind, they simply had NO right to complain.

But now was different …I was ready to spend hours every day in my office trying to do my best but everything there was against me.

My father didn’t agree with rubber dam use and new techniques, the scheduling of patients:  for every procedure just 30 minutes were available including cleaning of the chair  and anesthesia, patients were not interested in saving teeth or spending some more money to save them; to propose a crown lengthening procedure to save  a tooth was  for sure a: “pull it out “ answer . To propose a crown on a endodontically treated tooth in 90% of times was a waste of time.

Full mouth rehabilitation was something seen only in the congresses. In my office at that time only when anterior teeth were missing, was possible to speak about bridge or similar fixed options.

After days spent in this way, in the free time I had a lot of reasons to complain.

My father is against me ; my patients don’t accept my treatment plan ; people don’t understand my effort ; people have no money for teeth and so on; I have no time to do a correct procedure; Patients don’t trust me if I propose something different from my father; I have to work alone without an assistant .

Being also a small town it was also impossible to work in another office. Knowing my father, nobody would have accepted me inside. I was in a cage.

I was full of will to work in the best way but there were too many things against me ….if only I had a different working situation….

My complaining was fully right, it wasn’t similar to the wrong kind of complaining but the point I realized after too much time was different.

It doesn’t matter if you have good reasons or not to complain about your situation.

First of all, nobody is really objective in his evaluation, especially about themselves, so you can think to be right while you’re perfectly wrong.

But the second and more important point is that complaining is completely useless, if not worst.

If you focus on complaining your mind is busy on this, while you need a clear mind to try to think about solutions.

Complaining leaves energy and brain to think about solutions.

Complaining is just a depressive and useless thing.

Trying to find solutions is a useful exercise and you also train your mind to see things in a different way.

Almost 17 years passed from those days, but I want to remember those days because, going to courses and congresses, I always meet people complaining about something.

Some of them are valuable colleagues that, for example, are forbidden to leave their country to boost their education, some of them are in a poor environment.

For sure some of them, like me at that time, have the full right to complain.

But it’s useless and it leaves you with less energy to think about how to get out from there.

Complaining is simply the fast track to failure and depression.

About me, in that far days if you want to know how I get out from that situation this is the story…. I realized that on old patients I wasn’t able to get something , but I realized that some new patients were not so much in line with my father’s style (scarce explanation, paternalistic relation with patient and so on ..) and I tried to get their trust with a different approach (more time explaining , involving them in treatment plan and so on….) , on this patient I started in easy treatments, like class I or endo treatment (where the placement of the rubber dam didn’t affect my working time ), to place rubber dam.

Sometimes I used also the missing of a dental assistant as the reason to use the rubber dam.

One small step after another, after 2 years, I was able to start to work on my own on some patients and be able to decide how much time have I to spent on each procedure.

We, humans, have scarce patience, we want everything fast and easy but the reality is that this is not how it works in most cases.

The best way to change situations is to change the way we relate to them.

The biggest change has to happen inside us, not outside.

And when we change, you will see that, after time, also situations change.

Hope this will help a lot of people struggling like me in tough situations.

More or less everybody has been there!